To share your memory on the wall of Dolores Branchik, sign in using one of the following options:

Age 91, died January 1, 2021 in Pittsburgh, after suffering for several years with Alzheimer’s Disease and more recently with Covid-19. She was the beloved wife of the late Joseph Branchik and ... Read More
Branchik
Dolores "Dolly" (Latusick)

Age 91, died January 1, 2021 in Pittsburgh, after suffering for several years with Alzheimer’s Disease and more recently with Covid-19. She was the beloved wife of the late Joseph Branchik and loving mother of Brad, Blaine (Christopher Rudman) and Trinace Baier (Philip). Dolly, who lived most of her adult life in Scott Township, was born in McKees Rocks, PA in 1929, the daughter of Walter and Mary (Horociak) Latusick. Following several years working for the National Association of Manufacturers early in her career, she became the Executive Secretary of Amen Corner, a Pittsburgh civic organization, a role she held for over 25 years. Dolly was a thinker, an avid reader, an excellent cook, a voracious and dedicated duplicate bridge player and a world traveler and had many, many enduring friendships. A private family service will be held.
Read Less

Receive notifications about information and event scheduling for Dolores

We encourage you to share your most beloved memories of Dolores here, so that the family and other loved ones can always see it. You can upload cherished photographs, or share your favorite stories, and can even comment on those shared by others. 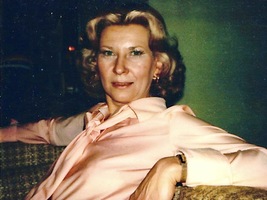