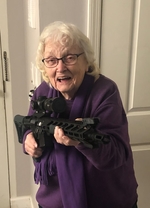 Born on March 26, 1937 and raised on the North Side of Pittsburgh. She was a graduate of Oliver High School.
Daughter of the late Edward G. Davis and the late Julia T. (Auber) Davis.
Loving Wife for 64 years to the late Joseph A. Neglio.
Sister to the late Edward Davis Jr. and Sharon Opperman.
Aunt to Lisa, Christine, and April.
Great Aunt of Brandon Rickard, Six Great Nieces and One Great Nephew.

Mary "Dar" could be found out on the loose daily buying lottery tickets, doughnuts, and causing shenanigans in Monroeville. She formed many friendships with the people she would encounter in her day to day travels. An infectious laugh, big smile, and a mischievous sense of humor.

In lieu of flowers a Catholic Mass in her honor would be appreciated.
Private services are entrusted to the Szal Funeral Home, Inc. 238 Helen Street McKees Rocks