To share your memory on the wall of Olga Bonchak, sign in using one of the following options:

Receive notifications about information and event scheduling for Olga

We encourage you to share your most beloved memories of Olga here, so that the family and other loved ones can always see it. You can upload cherished photographs, or share your favorite stories, and can even comment on those shared by others.

Flowers were purchased for the family of Olga Bonchak. Send Flowers

Posted Aug 05, 2019 at 02:11pm
We were so saddened to hear of the recent passing of Aunt Olga. It had been many years since we have seen each other but always know that everyone in McKees Rocks have always been in our thoughts and prayers. Our parents, Cy and Valerie, always enjoyed their visits to see everyone there. Our father Cy, particularly enjoyed Aunt Olga's and Uncle Bill's unfailing hospitality every time he would bring our Babcia to see her sister. He would speak of it often with fond memories.
It is never easy to lose someone you love. Rest assured, Aunt Olga is in the loving and healing arms of the Lord in Paradise. Our thoughts and prayers are with you during this difficult time.
With deepest sympathies,
Cathy and Jerome Bulanda (children of Cy and Valerie)
Comment Share
Share via:
HS

Posted Aug 05, 2019 at 01:19pm
Our thoughts and prayers are with you during this difficult time. With deepest condolences, Cathy and Jerome Bulanda (children of Cy and Valerie )

Flowers were purchased for the family of Olga Bonchak. Send Flowers 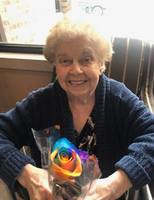