To share your memory on the wall of Patricia Shorter, sign in using one of the following options:

Passed away peacefully Friday May 14, 2021. Patricia Jean Shorter (Turner), fondly known as “Trish”, “Tricia” and "Patty" was born October 11th, 1956 in Elyria ,Ohio to the late Henry and Bessie Turner. She was one of many sisters, brothers, cousins, and more who live all throughout the country. Trish was from a very large immediate family; she was 1 of 16 brothers and sisters. From her immediate family she leaves behind 8 brothers: Dave, Jeff, John (Kim Arias-Turner), Jimmy, Roy, Eddie,
Jerry and Lonn Turner. She also leaves behind 4 sisters: Mary Turner,
Martha Richardson (Calvin Richardson), Genny Glass (Hymie Glass),
Barbara Stanton(William Stanton) and a host of nieces and nephews.
Preceding her in death are 2 sisters, Caroline “Candy” Turner and
Betty Turner and 1 brother, Joseph Turner.
She also leaves behind two precious children, which for all those who knew “Trish”,
knew those were her two favorite people in the world.
Her daughter: Desiree Jackson(Carlton Jackson) or as she always called her, “Desi” and
her son Ray Shorter Jr or as she always called him, “Little Ray”.

In Trish’s early years she graduated from Elyria High school. Trish was known for her love of roller skating, fashion, love for a good burger from her favorite spot “Mr Hero’s” or her favorite glass of pop, and most of all her devout love for her family. Trish was also known for her captivating personality. She could easily liven up any room she entered. After having children, Trish resided in the suburbs of Pittsburgh, PA for most of her life. She was very well known in her home borough of Bellevue, PA. If she really liked you she would give you a shimmy, sing you a song, call you “baby” or even sometimes “sexy". With her contagious personality instantly when most people met her often one would say “ I just love her”.

Despite the emotional and physical limitations she suffered, she did not choose to let those ailments hold her back. She was able to work part time for Residential Care Services for many years and constantly put the needs of others before herself. She had a passion for cooking, adored music such as El Debarge, James Brown, Michael Jackson and would even break out in song to some of her favorite kingdom melodies talking about Jehovah and God’s Kingdom. She loved good television, even thinking she should be a contestant on “The Voice '' one day. Trish truly left a positive lasting impression on whomever she met. In her final days she acknowledged her love for Jehovah God even more and was comforted by his word the Bible and the promise at Revelation 21:3,4 where death and suffering will be no more and looked forward to the hope of renewed health on a paradise earth.

In addition to the family, Trish also leaves behind dear companions such as Earl Dixon, Enid Knox, the diligent staff at Staunton Clinic including Pam Pachowski, the wonderful staff of Life Pittsburgh including Amy Shonts, Kiara Fetcko, Whitney Stiger, and Ferrell Shaw just to name a few and many others that helped Trisha in her last years of her life. The Shorter/Turner Family truly appreciates the care and love that has been shown by friends, medical, and professional staff that has assisted Trish over many years. As a family we appreciate the love that has been shown directly to us to cope at this difficult time. A “Zoom” virtual memorial service will be held Friday May 21st at 2pm EST. For the zoom login details please email her daughter Desiree at cdjackjw@gmail.com.
Read Less

Receive notifications about information and event scheduling for Patricia

We encourage you to share your most beloved memories of Patricia here, so that the family and other loved ones can always see it. You can upload cherished photographs, or share your favorite stories, and can even comment on those shared by others. 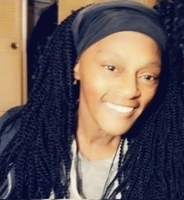