To share your memory on the wall of Russell Coast, sign in using one of the following options:

Provide comfort for the family by sending flowers or planting a tree in memory of Russell Coast.

Provide comfort for the family of Russell Coast with a meaningful gesture of sympathy.

Russell "Rusty" Glenn Coast, 53, of Bridgeville, Pennsylvania, formerly of Irwin Township and Franklin, Venango County, passed away on February 21 2020 with loved ones by his side in Select Specialty Hospita... Read More
Coast
Russell G."Rusty"

Russell "Rusty" Glenn Coast, 53, of Bridgeville, Pennsylvania, formerly of Irwin Township and Franklin, Venango County, passed away on February 21 2020 with loved ones by his side in Select Specialty Hospital at Montefiore Hospital, Pittsburgh. Diagnosed two years ago with End Stage Renal Disease (ESRD), he suffered from its many complications before succumbing to illness.

He was born March 13, 1966, in Grove City, PA, son of Richard M. Coast and Sylvia M. Russell Coast. Although Rusty was a quadriplegic since July of 1979 due to a swimming accident, he went on to lead a full and independent life. He attended Victory Elementary School in Irwin Township and graduated from Franklin High School in 1984 where he was one of six students commended for their 1982 PSAT/NSMQT scores. He went on to attend one year at Carnegie Mellon University in Pittsburgh; receiving his bachelor of science degree in education in 1988 from Slippery Rock University, Slippery Rock. He taught physics and science at Franklin High School for three years, leaving to attend the University of Akron in Ohio, where he received a master of science in physics in 1994. He continued there, working in a doctoral program until leaving to accept a job with Vodafone Airtouch/Verizon Wireless in Lewis Center, Ohio. He made his home in Powell, Ohio before moving back home to Pennsylvania in 2013 to work for Verizon Wireless in Bridgeville. He retired in December 2018 after 21 years with Verizon Wireless.

Rusty enjoyed hunting with family, Pony League and riding his six-wheeler in his younger years. He was able to drive a customized van for his personal transportation. He loved family gatherings and since his diagnosis these were very important to him. He spent many hours on his computer using flight simulation software, doing research and listening to podcasts and music. Cooking shows and trying new recipes were favorite hobbies. He never lost his love of learning nor his love of his hard-earned independence.

There will be no viewing or service per his wishes. A memorial will be held at a later date.

Receive notifications about information and event scheduling for Russell 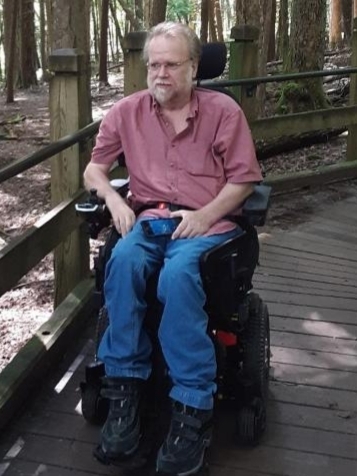 We encourage you to share any memorable photos or stories about Russell. All tributes placed on and purchased through this memorial website will remain on in perpetuity for generations.

I have worked with in 2011 and 2012 time frame. I was hired in data performance he was my technical lead. He helped to survive in Verizon a great mentor excellent humble human being. He was one of Verizon's top brilliant engineers. My heart goes out to Rusty's family at this time and I pray for a peace that will keep you as you remember Rusty's greatness as a person. He will be missed and forever remembered by me and the Verizon family.
Comment | Share Posted Mar 06, 2020 at 12:54pm via Condolence
SA

Sermad Ali : I have worked with in 2011 and 2012 time frame. I was hired in data performance he was my technical lead. He helped to survive in Verizon a great mentor excellent humble human being. He was one of Verizon's top brilliant engineers. My heart goes out to Rusty's family at this time and I pray for a peace that will keep you as you remember Rusty's greatness as a person. He will be missed and forever remembered by me and the Verizon family.My prayers is with him
Comment | Share Posted Mar 06, 2020 at 12:53pm via Condolence
B

Sylvia and family we are very sorry for your loss. Know you have all been thru so much. Rusty is now without pain and in a better place. May your memories help you thru this difficult time. Jim & Maribeth Bajorek
Comment | Share Posted Feb 26, 2020 at 06:33pm via Condolence
AK

I met Rusty at Verizon when I moved to Ohio/PA region to lead that team. He was one of Verizon's top brilliant engineers and he became one of 2 trusted technical advisors I had at that time. Rusty was respected across the company and drove many changes that helped make Verizon best in that market, to become one of the best performing Verizon markets in the country. My heart goes out to Rusty's family at this time and I pray for a peace that will keep you as you remember Rusty's greatness as a person. He will be missed and forever remembered by me and the Verizon family.
Comment | Share Posted Feb 26, 2020 at 12:51pm via Condolence
AM

I met Rusty at work (Airtouch) after I relocated to Columbus back in '98. I was taking over a project that he was working on. When I first met him, he was to brief me on the work he had done and where I needed to pick up. I noticed right away, that he was very intelligent, not just smart, as in he knew things; but that he was genuinely engaged with you in conversation. As though if he did not pay all of his attention to what you were saying or asking, he might miss something important. I quickly learned to reciprocate, what he was saying was always well thought out and insightful. There was always something to learn in a conversation with Rusty. He was so easy to talk to, about anything.
Before long, we were part of a small group of friends that would go out after work for dinner and drinks. This continued even after I had relocated a few more times. Anytime I came to Columbus, or Pittsburgh for training or a meeting, or my wife and I would come down to the Irish fest, we'd try to get together for dinner and drinks. His laugh and quick wit always kept the conversations moving and before long, we had stayed too late. It was easy to lose time when you went out with Rusty. I will miss that. I will miss him.
He was one of the very few people I've met where I could not think of anything bad about him, Always upbeat, Always friendly, Always willing to help...
My wife and I are so sorry for your loss. Our thoughts and prayers go out to the entire Coast family. God Bless